As you know, all languages are made up of tenses. In this post we’re going to look at some Future Tenses, and some other tenses and structures that can be used in English to talk about the Future – namely the Future Simple, ‘Be Going To’, and bizarrely, the Present Simple and the Present Continuous! Let’s go!

It’s also very common in Informal English and spoken English to contract the Subject Pronoun and Will, like this:

We use the future simple to make Predictions about the future when we have no evidence – that is to say that we don’t have any information or knowledge to support our prediction.

‘Aliens will visit earth soon’ – but there’s no evidence (at the time of writing!) of the existence of alien life.

‘People will take holidays in space soon’ – similarly (at the time of writing!) space tourism still looks like something for future generations, rather than something that might happen soon.

We can also use the future simple tense when we decide something at the moment of speaking – this is sometimes called a Spontaneous Decision.

In both of these examples, the speaker didn’t have a plan already, they made the decisions to have soup or take two bags at the moment they were speaking.

Will/Won’t + Infinitive without ‘to’

We can use the Future Simple tense for Predictions (without evidence) and for Spontaneous Decisions.

Think Ireland will win the World Cup in 2030!

'Be Going To' Future

We use the structure ‘to be going to + the infinitive of a main verb’ to make Predictions about the future. When we use this structure, we communicate that we are making our prediction because something now is telling us about the future – we have evidence to support the prediction.

If the sky looks dark and cloudy, we can say that ‘It is going to rain today’
If the bus arrives late at your bus stop you can say ‘I am going to be late for work’

In both sentences, the speaker uses the structure ‘to be going to + the infinitive’ because they are predicting the future. In each situation, the speaker has evidence now to support their predictions.

We also use the structure ‘to be going to + the infinitive of a main verb’ to communicate a Future Intention. Future intentions are actions that we want to do in the future.

Using the structure ‘to be going to + the infinitive’ communicates that travelling around the world is something that you ‘want to do’ in the future, it is a future intention

Here is another example:

‘I am going to be a doctor when I grow up’. Here the speaker is saying that being a doctor is their future intention, it is what they want to do in the future.

Be Going To + Verb infinitive

We can use the ‘Be Going To’ tense for Predictions (with evidence) and for Future Intentions.

You’re driving too fast in these icy conditions – you’re going to crash!

I’m going to study English at University next year.

The Present Continuous and Present Simple for the Future

We can also use two present tenses to talk about future ideas (yes, I know, English can be weird!). We use the Present Continuous to speak about our Future Arrangements and Plans. Future plans are arrangements that we have made for the future. These are different to intentions because they have been organised to happen. They are more certain to happen.

For example, here are my plans for Saturday:

‘I am meeting John at 7 o clock’ – We’ve agreed on the time and place.
‘We are going to the theatre’ – I bought the tickets a month ago.
‘After the theatre, we are eating in a restaurant’ – I’ve booked a table.
‘We are taking a taxi home at 10pm’ – I booked one with a taxi app.

We use the Present Simple tense to speak about a future action when we are talking about timetables or schedules.

When we think about timetables or schedules we can include:

Here are some examples of the present simple to communicate the future:

We can use the Present Continuous tense for Future Plans and for Arrangements.

We can use the Present Simple tense for Schedules or Timetables.

I’m flying to America next month. I booked the plane ticket ages ago.

Join a live online English tutor to get help with your English.

Individual and group classes with our expert teachers.

To contract: to make something smaller/shorter

Evidence: knowledge or information that allows you to reach a conclusion

Spontaneous: something that happens suddenly – without any previous thought or planning

Thank you for reading our post. You’ll find more English grammar tips elsewhere on our site and if you’d like information on our English courses in Dublin, please do not hesitate to contact us.

Have something done
John

Have Something Done Quiz 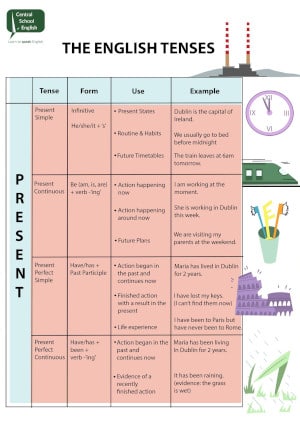