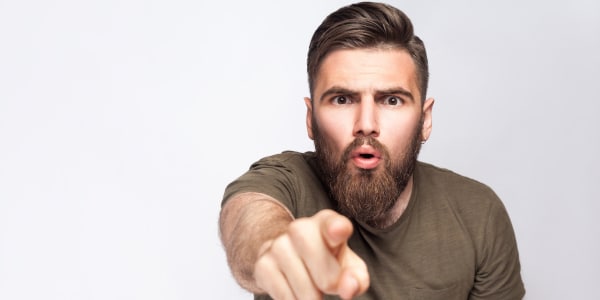 Hey you! Stop what you’re doing and read this now! In this blog post we’ll look at how to use indirect speech to report  imperative statements.

What is the imperative?

Did I seem a bit rude in the opening paragraph? Sorry, but I was using some examples of the imperative. In English the imperative often sounds a bit rude or aggressive. It is normally used by people in positions of authority like parents, teachers, police officers or bosses to give orders or instructions. So be careful not to use the imperative if you want to sound friendly! If we say please at the end of an imperative statement it still sounds like an order, but a more polite order.

Open the door!
Stop talking!
Close your books, please.
Tell me the truth!

When we change a negative imperative from direct speech into indirect speech we must also use the verbs told, ordered or commanded and put the word not before the infinitive.

Direct speech: Don’t close your books!
Indirect speech: The teacher told the students not to close their books.

It’s nice to be polite!

Most communication in English is done in a polite way. We often express our ideas in a less direct way than in some other languages. So instead of using the imperative and saying:

Could you close the window, please?
or:
Would you mind closing the window?

Join a live online English tutor to get help with your English.

Individual and group classes with our expert teachers.

Thank you for reading our post. You’ll find more English grammar tips elsewhere on our site and if you’d like information on our online English courses from Dublin, please do not hesitate to contact us.